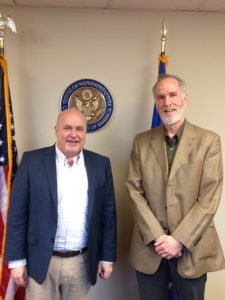 Professor Meyer Jackson met with Congressman Mark Pocan on behalf of the Biophysical Society as part of their effort to advocate for increased federal funding for biomedical research. Jackson talked about the groundbreaking work being done by members of the program and how the interdisciplinary nature of biophysical research helps the entire campus.

Congressman Pocan attended the University of Wisconsin–Madison, earning a bachelor’s degree in journalism in 1986. He has served as U.S. Representative for Wisconsin’s 2nd congressional district since 2013.