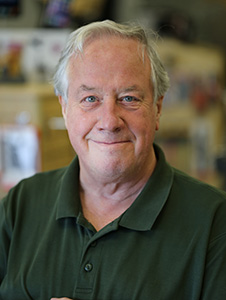 Columbia University will award the 2020 Louisa Gross Horwitz Prize to three scientists, including our very own Dr. Robert Fettiplace.

Fettiplace, along with Dr. A James Hudspeth (HHMI/Rockefeller University) and Dr. Christine Petit (Collège de France/Institut Pasteur) were recognized for discovering the molecular and cellular mechanisms behind hearing. The work of these three winners of the 2020 Louisa Gross Horwitz Prize helps us understand why hearing is so vulnerable to damage and proposes ways to protect and repair hearing.

Robert Fettiplace showed that individual sensory cells inside the ear called hair cells, located inside the cochlea (a spiral-shaped cavity within the inner ear), are electrically tuned to specific sound frequencies and are arranged in an ordered pattern, much like the keys of a piano. In subsequent experiments he showed that each hair cell is defined by the properties and location of specific types of ion channels in the cell.

The Louisa Gross Horwitz Prize was established under the will of the late S. Gross Horwitz through a bequest to Columbia University. It is named in honor of the donor’s mother, Louisa Gross Horwitz, who was the daughter of Dr. Samuel David Gross (1805-89), a prominent Philadelphia surgeon who served as president of the American Medical Association and wrote “Systems of Surgery.” Of the 103 Horwitz Prize winners to date, 51 have gone on to receive Nobel Prizes. The 2020 Louisa Gross Horwitz Prize Lectures will be hosted virtually this year. Dr. Fettiplace and Dr. Hudspeth will present their lectures on Nov. 24, and Dr. Petit will give her lecture later this year on a date yet to be determined.