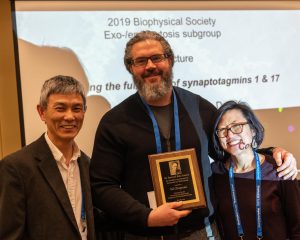 Dr. Ed Chapman received the 2019 Sir Bernard Katz Award of the Exocytosis/Endocytosis subgroup of the Biophysical Society. Recipients of this award include some of the most distinguished investigators of synaptic transmission.

Chapman’s lab studies how neurons send chemical signals from one to another through synapses. A major focus is on fusion pores, openings that release neurotransmitters from the cell and play a key role in neurological and endocrine function.

The award is named after Sir Bernard Katz, the investigator who established the exocytotic nature of synaptic transmission and discovered the ligand-gated channel basis for the post-synaptic response.

Chapman gave the Keynote Lecture, “Diverse Functions of the Synaptotagmins,” at the 2019 Biophysical Society on March 2nd.