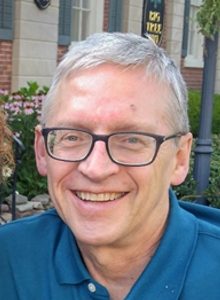 Sounds are a series of airborne pressure waves converted into a neural signal by inner ear hair cells and sent to the auditory central nervous system (CNS) via cranial nerve VIII. This information ascends through a sequence of “stations” in the auditory CNS. As it ascends, through brainstem auditory nuclei, inferior colliculus, auditory thalamus then to auditory cortex, the information is modified. The major sources of these modifications performed by each cell type are 1) the intrinsic circuitry of that particular station and its influence on that cell, 2) the cell’s own intrinsic characteristics and 3) influences of inputs from other stations both above and below.

In my “earlier” Madison years, my research interests focused on understanding the circuitry of the auditory brainstem i.e. what information do cells extract from their input about the auditory environment, what mechanisms do they use for doing this, and where do they then send this information. My experimental approaches utilized both physiological and anatomical methods using an in vivo anesthetized cat preparation and an in vitro rodent brain slice preparation. The primary method for recording from nerve cells utilized sharp or patch glass electrodes that penetrate or patch onto the cell and record intracellular currents/voltages from single nerve cells or axons. This approach in vivo allows one to present computer-controlled auditory stimuli to the ears while monitoring the intracellular response of the cell. As you might imagine, recording intracellular response from single neurons in the brain of an animal is a daunting task and the intracellular recordings are often short- lived. In the brain slice preparation longer more stable recordings with sharp or patch electrodes are more easily achieved but there is no ear attached to the slice so auditory stimulation is not possible. Such an approach does, however, allow one to monitor intracellular response to synaptic inputs that are driven electrically, to pharmacologically manipulate these synaptic inputs, and also to characterize the cell’s membrane features, ie. what channels it has for passing charged ions across its membrane and how these influence the spike output. In both methods a small molecule (Neurobiotin) is in solution inside the electrode and can be injected into the cell. It diffuses everywhere in the cell and can be made electron dense so that the physiologically characterized cell can subsequently be identified, analyzed anatomically and categorized at both the light and electron microscopic level. For a brief period of time I moved “north” to work on questions of auditory encoding in the auditory thalamus and cortex but missed the brainstem too much and headed back down in 2012. Together with an old friend and colleague, Philip Joris at the University of Leuven, Belgium we wrote and received and R01 grant in 2013 to continue to unravel auditory brainstem circuitry. 4 times a year I head to Belgium to do the physiology part of the experiments and then bring the brains back to Madison to do the anatomy end. Together with some gifted students and post-docs in Leuven we have uncovered some remarkable characteristics of brainstem circuitry that we think go a long way to understanding many aspects of auditory processing. I have also recently taken over the lab and NIH grant of a dear, departed friend and colleague, Donata Oertel, and am continuing her work on the T-stellate circuitry in the cochlear nucleus.

In summary, my research has focused on the clarification of the structure and function of the individual components making up the circuitry of the auditory CNS. 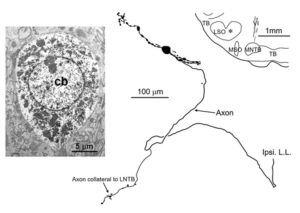 Figure 1 (above): LSO principal cell. E.M. of cell body (left), camera lucida drawing of the cell (middle) and its location in LSO (right). 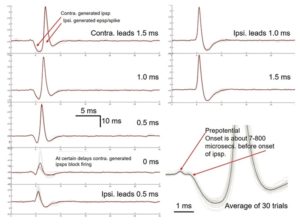 Figure 2 (above): Response of the same LSO cell to clicks applied to both ears as the inter-aural delay between the stimuli is varied in sub-millisecond steps.