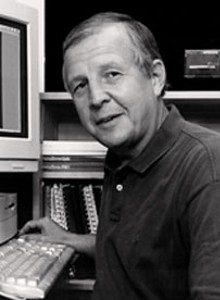 The effort in my laboratory is directed at an understanding of the molecular mechanisms which underlie neurotransmitter release and receptor activation. Several families of proteins which are of specific biochemical interest to us are: (a)beta-adrenergic receptors and rhodopsin, (b) GTP binding proteins, (c) catecholamine transport proteins and (d) sigma receptors.

Projects to identify structural and functional domains of adrenergic receptors and G proteins include: (a) intermolecular interactions between G-proteins and receptors; (b) identification of the G-protein a-subunit interaction domain with effectors, such as the enzyme, adenylyl cyclase, and the g-subunit of cGMP phosphodiesterase; and (c) the three-dimensional structure of active domains of the G-protein-inked receptors and adenylyl cyclase using NMR and crystallography approaches. These experiments utilize multiple methodological approaches, including baculovirus expression of receptors, synthesis and use of agonist and antagonist photoaffinity labels, and the application of “tethered” photoactivatable molecules to probe G-protein structure and nearest neighbor interactions.

Two types of catecholamine transport proteins are being characterized: (a) the storage vesicle transporter, which is inhibited by the drug reserpine; and (b) the plasma membrane transporter, which is inhibited by drugs of abuse, such as cocaine. Molecular properties of the transporters are being determined using radioiodinated reserpine and cocaine photoaffinity labels, purification and cloning, PCR amplication of transporter sequences, and stable expression of transporters in cultured cell lines, such as HeLa, COS, and CHO. The plasma membrane transporters are targets for drugs which are used to treat depression, targets for drugs of abuse, such as cocaine, and may be involved in the etiology of schizophrenia. The sigma receptor is a mammalian protein with multiple putative functions in the brain and the periphery. We have demonstrated that calcium-activiated potassium channels are inhibited by sigma receptors and that these receptors are enriched in cancer cells. Our goal is to identify the natural ligands for the sigma receptor, characterize the binding site, and determine the role of the sigma receptor in intracellular signaling.

A student in my laboratory will receive training on the molecular pharmacology of neurotransmitter mechanisms, membrane protein purification, synthesis and use of photoaffinity labels, and applications of molecular biology to the study of receptors, G proteins, effectors, and transporters.