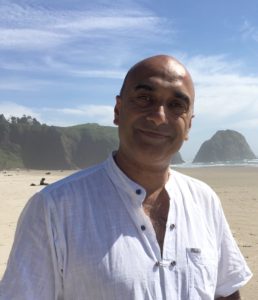 The lab aims to further the search for treatments and cures for epilepsy and cancer. Together these diseases afflict around 5% of the world’s population, around 15 million Americans every year. We study these seemingly disparate diseases because we discovered that one protein, REST, plays a key role in both conditions (Garriga-Canut et al., 2006; Wagoner et al., 2010). REST is a master regulator of the transcription of some 2000 genes, controlling expression both in and outside the nervous system, and this is why it impacts diverse diseases.

Our early work demonstrated that REST is itself controlled by energy metabolism. Thus we were able to regulate a suite of genes in a given cell type by simply controlling the amount of glucose supplied to the cells. Knowing that REST regulates genes in the brain that are involved in epilepsy, we went on to demonstrate that epileptogenesis can be retarded using a sugar ‘mimic’ 2-deoxyglucose (2DG), a well known anti-glycolytic compound. Since our study, other groups have reproduced our results in other models of epilepsy, and this has led to the evaluation of 2DG in clinical trials at the University of Virginia by Dr. Nathan Fountain (Garriga-Canut et al., 2006; Huang and McNamara, 2006; Rho, 2008). This compound represents the founding member of a new class of Anti-Epileptogenic Drugs (AEDs) that target energy metabolism in neurons. Because most AEDs have cognitive side effects, and because current drugs fail to control seizures in nearly 50% of epilepsy patients, the possibility of using well-tolerated metabolic regulators to treat epilepsy is exciting.

We demonstrated that the mechanism of this interaction depends upon binding of a REST co-repressor, CtBP. This binding is sensitive to glycolytic activity, since CtBP is displaced from REST binding by the molecule, NADH, generated by glycolysis. My lab is currently exploring how the other members of the REST-CtBP complex are affected by metabolism: These other members include enzymes responsible for chromatin metabolism to impact gene expression (Roopra et al., 2001; Roopra et al., 2004; Roopra et al., 2000). Chromatin and epigenetic modifiers are of considerable clinical importance as drugs because of the potential to target their enzymatic function. Our study will test whether chromatin regulators that are recruited with CtBP might be novel drug targets in the quest to find ever more specific AEDs.

The degree to which REST represses gene expression is contingent on energy metabolism in the cell. My lab has discovered that one set of genes controlled by REST modulates the mTOR pathway, a signaling cascade that is key to learning, memory and epilepsy. During our studies of the role of REST in the long-term, chronic regulation of mTOR pathway gene expression, we made another observation that has illustrated the role of a distinct energy sensor, AMPK in rapid, acute responses. Thus we have shown that both Long Term Potentiation (LTP) and Long Term Depression (LTD) in the hippocampus, both forms of mTOR dependent plasticity and are thought to play major roles in memory and epilepsy, can be controlled through AMPK. Amongst other things, this result could explain why humans and animals demonstrate enhanced learning and memory after glucose intake. These findings are described by Potter et al (2010) and suggest another route to prevent seizures developing into epilepsy (Potter et al., 2010). We have gone on to show that metformin is a potent modulator of plasticity in the hippocampus. Metformin activates AMPK, and is a compound used by millions of people around the world to manage diabetes. We are currently testing whether metformin can prevent epileptogenesis in mouse models.

Mutations in either of two genes that encode inhibitors of the mTOR pathway (TSC1 or TSC2) cause a disease called Tuberous Sclerosis Complex, which affects 1 in 10,000 individuals. The symptoms include autism, systemic benign tumors, tubers in the brain, and epilepsy in 80% of patients by the first year of life. Having shown that AMPK can control mTOR in the nervous system, we tested whether drugs like metformin might suppress aberrant mTOR signaling in TSC patients. This line of inquiry opened up a remarkable vista of the intricate signaling pathways in the hippocampus. Thus, we now know that TSC mutations cause not only an increase in mTOR signaling but also activation of other pathways important in plasticity. Our efforts are now focused on these compensatory signaling processes. The seizure, behavioral and plasticity phenotypes associated with Tuberous Sclerosis can be suppressed by targeting a set of ancillary pathways in the brain.

While defining the role of REST in the nervous system, we observed that many of the genes controlled by REST in the brain have roles in cancer progression. My lab therefore began analyzing REST function in publicly available whole-genome expression datasets from breast cancer patients. We discovered that REST is lost in up to 20% of breast cancers. These ‘RESTless’ tumors are found in all known sub-classes of breast cancer and are highly aggressive. Indeed, patients bearing a RESTless tumor have a greater than 50% chance of succumbing to the disease within 3 years of diagnosis (Wagoner et al., 2010). A current line of research is focused on defining the mechanisms behind the aggression of RESTless breast cancer. We have defined a number of oncogenic REST target genes that are induced upon loss of REST to drive tumor growth in vitro and in vivo. While we initially used the REST-based gene signature and clustering algorithm to interrogate breast cancer gene expression data sets, these tools actually allowed us to analyze all gene expression dataset in the NCBI archives. It quickly became obvious that REST plays a major role in not only breast cancer but other cancers as well. Work is now underway to target signaling pathways that modulate the function of REST and REST target genes to reverse aggressive nature of REST associated cancers.

My lab studies these topics using state-of-the-art bioinformatics, looking at whole genome expression profiles in cell lines, human cancer and epilepsy patient data. We combine this technique with classical biochemistry, pharmacology and physiology to generate novel strategies for discovery and translation. My lab has successfully generated gene signatures that are predictive of poor prognosis in a number of cancers and neurological disorders. Our in vitro, animal and biochemical work elucidates mechanisms that suggest treatment options for these diseases. This has been remarkably successful at generating novel drug targets in the domains of neuroscience and cancer biology. Long term, we propose to continue to evaluate the biology of this master transcriptional regulator, since it controls so much pathogenesis in both systems, and use it as a discovery tool for epigenetic and metabolic regulators of cancer and epilepsy.