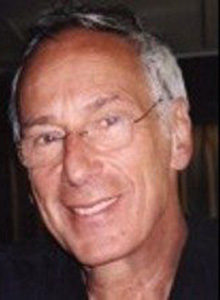 In memory of Dr. Peter Lipton.

Our research focuses on mammalian brain, and almost all the work is done on the hippocampal slice, which is removed from the brain but still functions, electrophysiologically and biochemically. As such, it can be studied quite easily. The hippocampus plays a critical role in memory formation, and is also the most susceptible area in the brain to oxygen deprivation.

There are three major projects currently underway in the laboratory and they relate to these properties of the hippocampus. 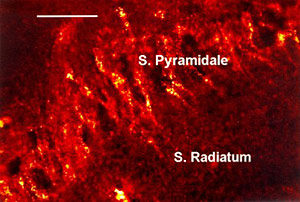 Figure (above): Calcium concentrations within neurons in a surviving hippocampal slice
taken from rat brain,as indicated by fluorescence of a calcium-responsive dye.

The first concerns cellular mechanisms of learning and memory. There is considerable evidence that a crucial step in memory formation is the synthesis of new proteins in the hippocampus.

We are using autoradiographic techniques to focus on proteins that are made in dendrites of hippocampal neurons, near synapses. Very few proteins are made there, but we have found out that electrical stimulation of the axons that make contact with these dendrites greatly stimulates their synthesis of proteins. This only happens when the stimulus is combined with another neurotransmitter, acetylcholine. There is reason to believe this phenomenon is important in memory formation and we are studying its mechanisms and significance.

The third area concerns brain damage in stroke and heart attacks. Certain brain cells are permanently damaged by very short periods of oxygen deprivation. This damage is a major cause of death from heart attack and stroke. We are working on the cellular mechanisms of this damage. Why do such short periods of energy deprivation produce such profound effects? Why is brain so much more sensitive than other tissues? What molecular changes occur?

It is currently clear that calcium ions play a major role. We are trying to understand how calcium is regulated, and what calcium does.

Figure (right): Ischemia increases calcium concentrations in neurons, particularly in their dendrites and synaptic terminals. Pictures show calcium dye fluorescence from the same portion of the rat hippocampal brain slice viewed before (left) and during (right) deprivation of oxygen and glucose (termed in vitro ischemia).

In normal conditions (left) there is visible calcium fluorescence of the layer of cells but little elsewhere. During ischemia the cells fluoresce somewhat more intensely but, there is a very dramatic increase in fluorescence of the neuropil, containing dendrites and synaptic terminals (the region below the blue cell layer). Dendrites are very susceptible to damage from ischemia,in part due to this large calcium increase.