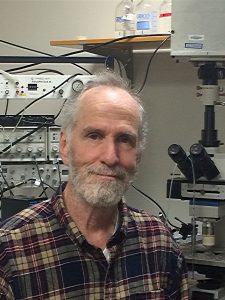 Our research focuses broadly on the function of nerve terminals, both how their neurotransmitter-filled vesicles fuse with the plasma membrane and how their excitability regulates the entry of Ca2+ to trigger membrane fusion. Our investigations of presynaptic mechanisms often take us into detailed studies at the molecular level, but we also venture in the opposite direction into questions about neural circuitry. To address these questions we employ the electrophysiological methods of patch clamping and amperometry, as well as a variety of forms of microscopy to image voltage and Ca2+.

Studies in PC12 cells, a powerful model system, have been especially productive in providing insight into the basic mechanism of Ca2+-triggered exocytosis. We have adapted the classical ideas of single ion channel mechanisms to the study of the fusion pore. This fusion pore spans both the vesicle and plasma membranes and in many ways behaves like an ion channel. We measure the flux through single fusion pores with amperometry and the conductance of single fusion pores by performing phase-lock measurements with a patch clamp amplifier. Experiments with these methods (in collaboration with Ed Chapman of this department) have indicated which proteins form the fusion pore and which proteins control their opening and expansion.

Fig. 1. An amperometry recording (below) signals three successive stages in exocytosis (above). The SNARE proteins, which play an essential role in exocytosis, are shown in different hypothetical configurations.

We also do experiments on the posterior pituitary, and have used this preparation to investigate presynaptic excitability. We have identified and characterized the ion channels in pituitary nerve terminals and shown how various signaling systems can target these ion channels for modulation. Present efforts focus on the sigma receptor, which modulates several ion channels (in collaboration with Arnold Ruoho of the Pharmacology Department), and the NO/cGMP signaling system, which produces a unique use-dependent enhancement of excitability. We are also imaging intra-terminal Ca2+ with two-photon microscopy in order to characterize the cytoplasmic Ca2+ buffers and explore how the spatial dynamics of Ca2+ controls the time course of release.

To relate what we learn at the molecular and cellular levels to neural circuit function we image electrical activity. Brain slices stained with a voltage sensitive dye can be imaged to follow the flow of electrical activity through a complex, intact neural circuit. This method is particularly powerful in detecting subtle variations in synaptic plasticity, and we have shown that long-term potentiation in hippocampal slices exhibits a complex form of spatial heterogeneity. We are also initiating a voltage imaging study of the superior colliculus (in collaboration with Michele Basso of this department), and we are attempting to develop genetically encoded voltage imaging probes (in collaboration with Baron Chanda of this department).

Fig. 2. A hippocampal slice stained with voltage sensitive dye (left) was imaged. Blue traces are optical signals that report electrical activity at each location. To image synaptic plasticity (right) theta bursts were applied and a difference map was constructed.